One of my pastimes is downloading data and playing around with it on Excel. I’m not kidding myself that doing this means anything in terms of original research, but I do find that I learn quite a lot about the particularities of the data and about the science in general by doing some simple calculations and graphing the numbers. There’s even occasionally a small feeling of discovery, a bit like the kind that you experience when you follow a well-trodden path in the mountains for the first time:

We were not pioneers ourselves, but we journeyed over old trails that were new to us, and with hearts open. Who shall distinguish? J. Monroe Thorington

Anyway, I downloaded some historical emissions data from the CDIAC site and played around with it. To repeat, there’s nothing new to science here, but there were a few things that I found that were new to me. First, let’s look at historical emissions of CO2 from man-made sources from 1850 to 2010. Note that for all of these graphs there are no data shown for 2011-2015. 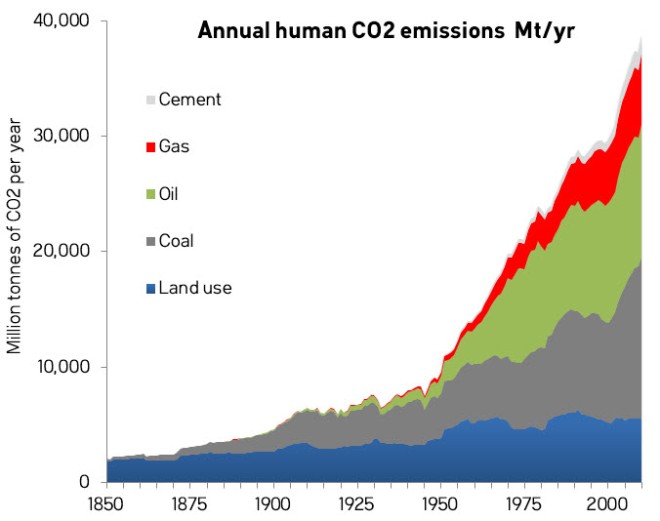 What immediately struck me—something I hadn’t fully appreciated before—was how small oil consumption was before 1950. Both world wars were carried out without huge increases in oil use, despite the massive mobilizations of armies, navies and air forces. You can make out some downward blips in coal consumption for the Great Depression (~1930) and around the end of WW2 (~1945).

It wasn’t until after 1950 that fossil-fuel consumption went nuts. Some people have taken to calling this inflection point The Great Acceleration, there’s more on this later.

What do these emissions from different sources look like as a proportion of all human emissions over this time period? 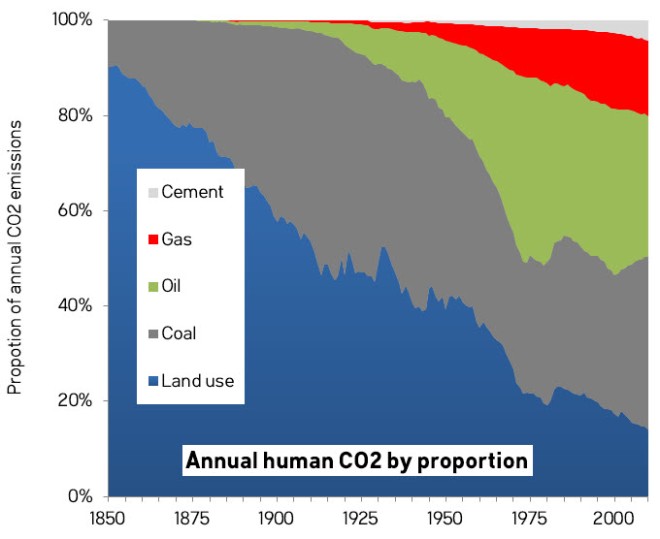 The graph shows the proportions, not the absolute amounts, of emissions in any given year attributable to one of the five main categories. Land use was the largest single source of emissions until 1915. From 1916 to 1967 coal and land use swapped positions as the leading source of CO2.  1967 was the last year that emissions from land use were bigger than those from coal or oil.

Let’s now look at the cumulative emissions of CO2 over the same period. Naturally enough, these are much smoother curves since they are integrals. 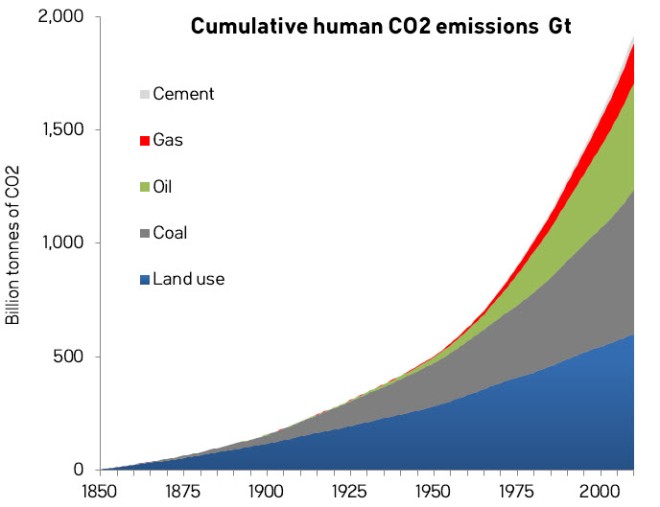 Proportions of all cumulative emissions over time are shown in the next chart. For this graph, I have added in  105 billion tonnes of CO2 emissions from land use and 5 billion from coal to cover the period 1750-1850 (these are approximate numbers derived from Le Quéré et al. (2014) Table 10 and the CDIAC fossil-fuel emissions data). 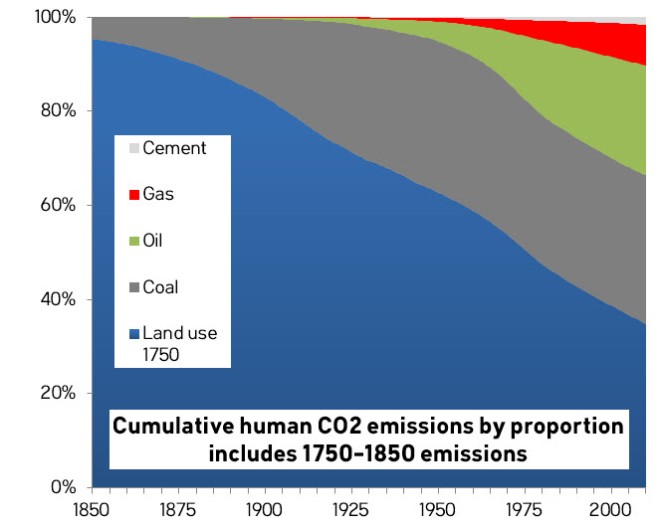 Cumulative land-use emissions exceeded all fossil-fuel  and cement sources of emissions combined until 1978. The Mauna Loa Observatory had been measuring CO2 concentrations for twenty years before the majority of the post-industrial increase had started to come from fossil fuels. Up to 2010, cumulative historical CO2  emissions have come from: land use 35%; coal 32%; oil 23%; gas and flaring 9%; and cement 2%.

How much change did these emissions make to the composition of the atmosphere? The following graph shows how much the composition would have changed if all of the CO2 emissions had simply stayed put in the air. (I used an equivalence of 2.13 GtC (or 7.8 GtCO2) for one ppm by volume of CO2 in the atmosphere. See Kharecha and Hansen, 2008.) Note that these do not include pre-1850 emissions. 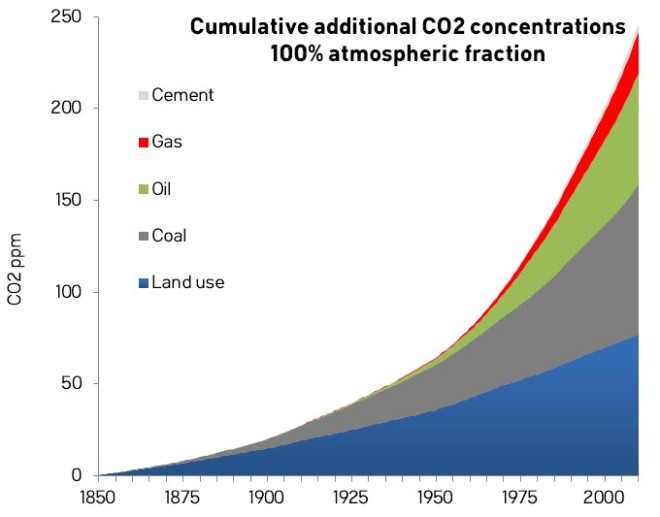 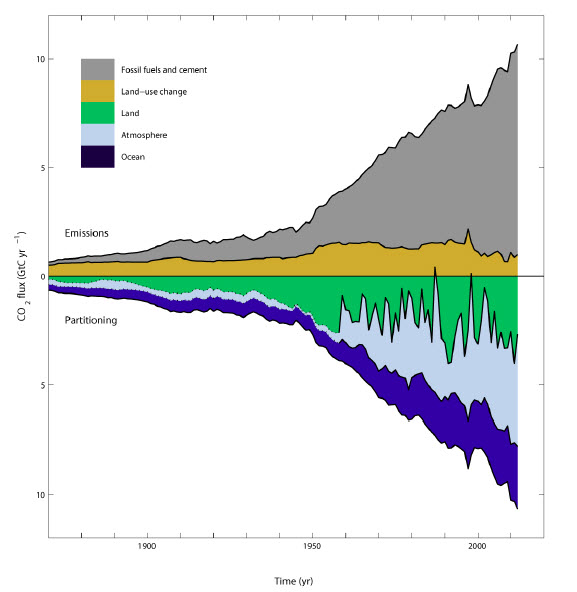 As you can see, the fraction of CO2 that remains in the atmosphere (light blue) varies a lot from year to year and  depends mainly on the land fraction (green), which in turn depends in part on weather patterns that influence plant growth. The partitioning is not just a function of this year’s emissions, but a complex function that relates to the different rates of several independent processes active on land and in the ocean that run at different speeds. For cumulative emissions over the period 1870-2012, Le Quéré et al. (2014) in their Table 10 estimate the cumulative partitioning between sinks and we can calculate the atmospheric fraction  as 42% (range 37-48%). Let’s assume, for the simple purposes here, a round number of 40% for the cumulative CO2 emitted over 1850-2010 that remains in the atmosphere at any given time. What we get is a graph that looks like this: 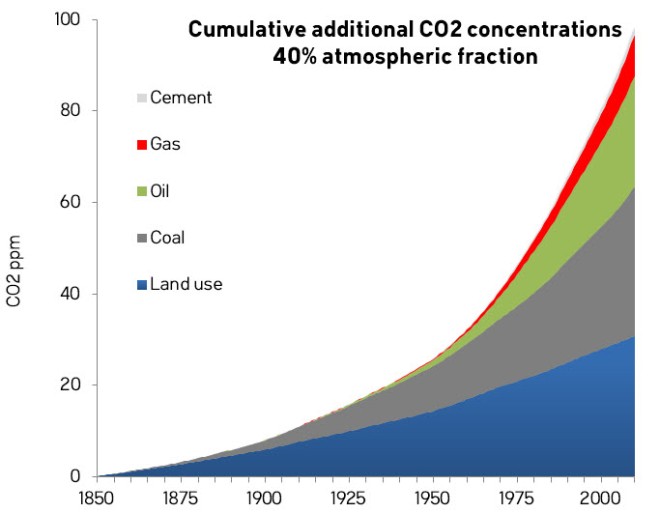 According to this, in 2010, humans should have added about 100 ppm to the atmospheric concentration of CO2 since 1850, once the portions going into the oceans and biosphere have been subtracted.

How does this compare to observations of atmospheric CO2? 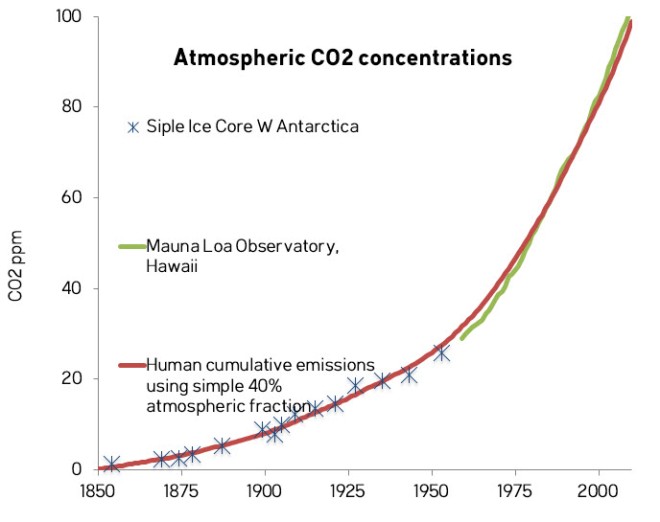 What I have done here is to plot the increase in CO2 relative to 1850 for 40% of the cumulative emissions against the CO2 observations for the West Antarctica Siple ice core and the annual observations from the Mauna Loa Observatory in Hawaii. Considering that I made some simplistic assumptions about the atmospheric fraction, the fit is pretty damned good. The good fit is not just in the magnitude of the values, but also the shape of the curve, where the observations match the inflection in the Great Acceleration.

When contrarians claim that the observed rise in CO2 came instead from some other source like volcanoes, not only are they wrong about the magnitude of the curve (volcano emissions are about 100 times too small), but the shape. If the world’s volcanoes had suddenly gone into high gear after 1950, we would have noticed.

There’s also the problem that if the extra atmospheric CO2 came from somewhere else, where would all the man-made CO2 have gone to? If it is supposed to have come out of the oceans, for example, as some people have suggested, we would have a big balance sheet problem and would have to hide all of the man-made emissions somewhere else, with the only remaining place being in the biosphere on land.

It wasn’t just fossil-fuel consumption that took off in 1950, of course. Just about everything did: population, GDP, dams, water use, international tourism, stratospheric ozone, nitrous oxide, methane, marine fish capture, coastal nitrogen, etc. Almost everything erupted like never before. Except volcanoes. 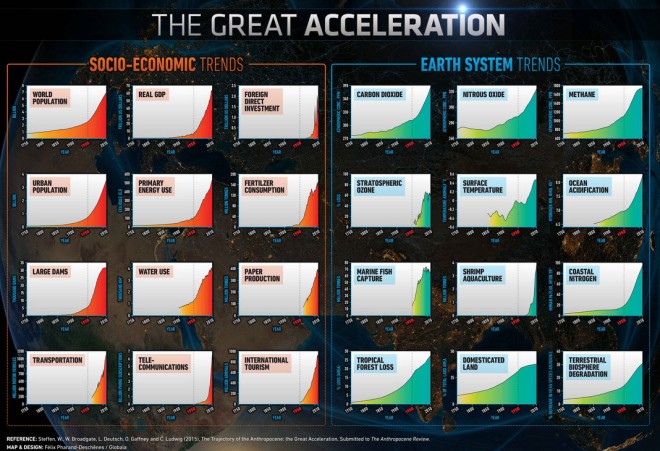 Something else exploded around that time.

According to some, ten seconds into the Anthropocene. New Mexico, July 16th, 1945. Source

Some of the researchers looking for a suitable start date for the Anthropocene have suggested July 16, 1945, not only because the explosions of atomic bombs have produced an artificial radionuclide signature in the world’s sediments that will be useful for the visiting alien stratigraphers of the distant future, but also because it coincides with the Great Acceleration.

The start date of the Anthropocene has not been settled, indeed there’s far from unanimity about whether we even need the term at all. Other contenders include dates early in the Holocene (8000 years ago), the Roman era (2000 years ago), genocides in the Americas (1570-1620) and the Industrial Revolution (~1712). Nature has a good summary.

What would the atmosphere look like today if the Great Acceleration hadn’t happened? 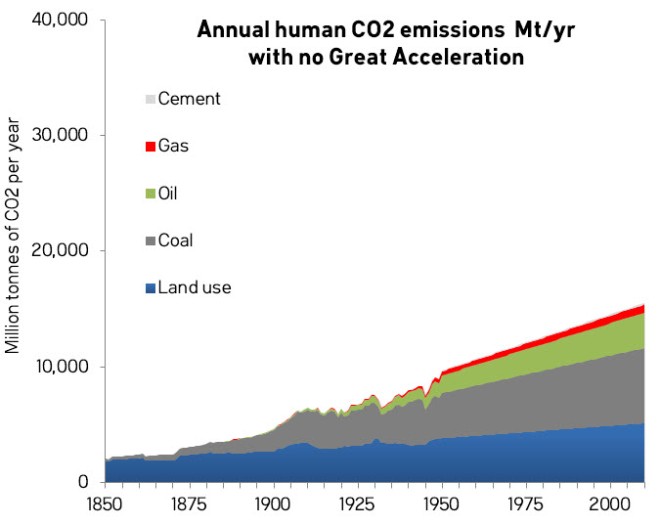 If we assume that, after 1950, emissions increased  linearly, at the same rate they had done, more or less, over the previous 60 years, then emissions rates would be in a counter-factual 2010 about one-third of what they actually are today. This is what a post-WW2 economist, equipped only with a ruler and pencil, might have predicted.

CO2 concentrations would have continued to climb and in a counter-factual today they would be about 30 ppm less than they are currently, very roughly, 370 instead of 400 ppm. Even if we could go back and undo the rapid growth of the Great Acceleration, we would gain only about 20 years: the atmosphere of the counter-factual 2015 would look something like the atmosphere of the actual 1995. Exponential growth has worsened and accelerated the climate crisis, but we would have eventually had to deal with one anyway, even if growth had followed a linear trajectory.

If we are to keep warming under two degrees, we will have to keep concentrations below 450 ppm. This will entail somehow provoking a Great Deceleration in emissions over the next few decades. That slowdown would have to be, roughly speaking, at least the inverse of the climb in emissions experienced after 1950. To stabilize the climate, we’ll have to get back to 1850s levels of emissions. Since population (certainly) and world GDP (very probably) will increase over the coming years, this will be no mean feat.

It’s quite possible I that made a mistake or two. If you find some and point them out, I’ll gladly update this post. Remember that the numbers are approximate, have been rounded and will not always add up or compute exactly. At best, all emissions estimates are ±5%.

A commenter at Skeptical Science asked for some emissions plots that were unstacked. He/she was right to ask, there are some things that jump out in an unstacked plot that get hidden when stacked. Here they are: 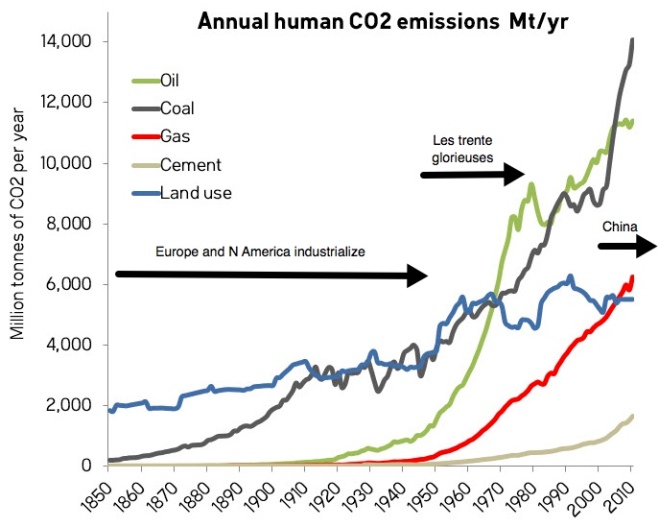 It is only recently that coal has become the undisputed champion of CO2 pollution. Oil ruled in the 1960s and land use was king up to 1910. From 1910 to 1960 coal and land use contributed roughly equally until they were both eclipsed by oil. The Great Acceleration, which the French refer to as “les trente glorieuses” was mainly about the very rapid rise in oil consumption after WW2. Then, China greatly increased coal consumption at the end of the 20th century. 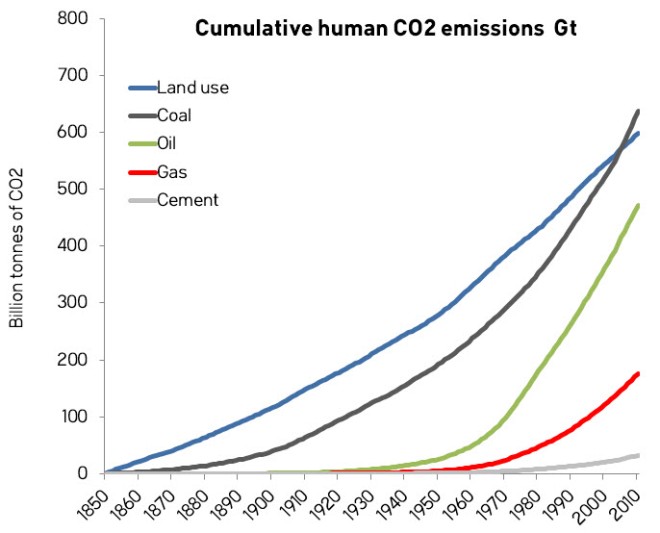 The cumulative emissions are from 1850 only. There were about 105 billion tonnes of CO2 emitted from land use and 5 billion tonnes from coal burning between 1750 and 1849. It is probable that, even today, the net contribution since 1750 of land use emissions to the increase of atmospheric CO2 is greater than from coal.

10 thoughts on “The history of emissions and the Great Acceleration”