This article was originally published online at Corporate Knights Magazine and will appear in the publication’s Fall 2016 hard-copy magazine. It was also previously republished, in part, at Skeptical Science.

Climate scientists are certain that human-caused emissions have increased carbon dioxide in the atmosphere by 44 per cent since the Industrial Revolution. Very few of them dispute that this has already caused average global temperatures to rise roughly 1 degree. Accompanying the warming is disruption to weather patterns, rising sea levels and increased ocean acidity. There is no doubt that further emissions will only make matters worse, possibly much worse. In a nutshell, that is the settled science on human-caused climate change.

What scientists cannot yet pin down is exactly how much warming we will get in the future. They do not know with precision how much a given quantity of emissions will lead to increased concentrations of greenhouse gases in the atmosphere. For climate impact it is the concentrations that matter, not the emissions. Up until now, 29 per cent of human emissions of carbon dioxide has been taken up by the oceans, 28 per cent has been absorbed by plant growth on land, and the remaining 43 per cent has accumulated in the atmosphere. Humans have increased carbon dioxide concentrations in the atmosphere from a pre-industrial level of 280 parts per million to over 400 today, a level not seen for millions of years.  END_OF_DOCUMENT_TOKEN_TO_BE_REPLACED

Geologists, especially those, like me, of a certain age, often have problems with climate science and the idea that humans may be triggering a massive and abrupt change in the climate. Global change, we were taught, occurred slowly and by commonplace mechanisms: sediment carried by water, deposited a grain at a time: erosion effected by water and wind, the hardest rocks slowly ground down crystal by crystal. The great features of the Earth—the canyons, mountains and basins—were built this way and owe their grandeur to Deep Time, geology’s greatest intellectual gift to human culture. In the face of the history of the natural world, geologists feel a certain humility at the insignificance of humans and our tiny lifespans. But we also feel some pride in the role of our subject in piecing together this history from fossils and outcrops of rock. It’s an amazing detective story: diligent scientists patiently working away and uncovering the Earth’s great secrets. 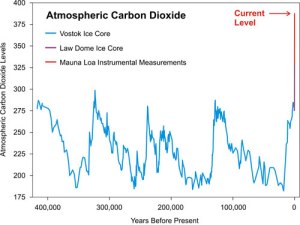 Then climate science comes along and grabs all the headlines. Suddenly, we hear, change is coming fast and the outcome could be ugly. The familiar music of natural geological change is about to be disrupted by a noisy interruption in the form of human intervention. To add insult to injury, many of the people delivering this disruptive message do not seem—at least to some geologists—to be sufficiently deferential to the extensive knowledge about the slow and cyclic changes in the geological past.

This is quite false, as I found out for myself. My initial reaction many years ago to hearing about climate change was one of disbelief, mixed with a strong suspicion that the climate forecasters had neglected to take the lessons of Earth history into account. I soon found out that I was completely wrong about this. I confess also, as I read the scientific literature, that I learned more about modern geology than I had in many years working as an industrial geoscientist. Unknown to me, immersed in my own areas of specialty, geology had moved on, especially in palaeoclimatology.

END_OF_DOCUMENT_TOKEN_TO_BE_REPLACED

The Athabasca Glacier in the Canadian Rocky Mountains is probably the easiest glacier in the world to access by car. It’s just a few hundred metres’ stroll from the nearest parking lot on the magnificent Icefields Parkway in Alberta. The problem is, the stroll keeps getting longer by about 10 metres every year. Since 1992, the snout of the glacier has retreated about 200 metres, requiring tourists anxious to set foot on it to walk a little further. The glacier has lost about 2 km of its length since 1844 (Geovista PDF).

The Athabasca Glacier seen from the access trail. This point is about halfway from the parking lot and the current snout of the glacier, which is about 200 metres away. In the centre background is the ice-fall from the Columbia Icefield.  The marker shows where the glacier snout was in 1992, coincidentally the year of the Rio Earth Summit. It is just possible to make out some people walking on the glacier on the left-hand side.Click for big.

END_OF_DOCUMENT_TOKEN_TO_BE_REPLACED

Sudden spikes in global temperatures that occurred 50-55 million years ago were caused by thawing of permafrost in Antarctica and northern high latitudes, according to recent research. The trigger for this sudden destabilization was a variation in orbital configurations that resulted in warmer polar summers. This model also provides an analogue for the releases of carbon from modern permafrost caused by current man-made global warming. Modern permafrost volumes are smaller than the estimates for those of 55 million years ago, but will nevertheless amplify the climatic effect of fossil fuel consumption and will provide continuing warming feedbacks for centuries after human emissions cease. END_OF_DOCUMENT_TOKEN_TO_BE_REPLACED

Fifty million years ago, during the Eocene Epoch , the world had a very different climate, with temperatures much higher than today’s, especially at the poles. This hothouse climate was caused mainly by CO2 levels that were twice as high, or more, than now. On our current emissions trajectory, we could recreate the chemistry of the hothouse atmosphere before the end of this century, with potentially drastic consequences for our climate.