END_OF_DOCUMENT_TOKEN_TO_BE_REPLACED

The volunteers at Skeptical Science, along with staff at the University of Queensland, have been busy over the past several months putting together a Massive Open Online Course (MOOC) on climate change. The course, Making Sense of Climate Science Denial, starts on April 28th and is free to anyone who wants to participate. It will last for seven weeks and will require an hour or two of attention every week.

The University of Queensland has a press release.

Thousands of people have already signed up, but we are hoping for many more. Learning will not just come from watching the many short video lectures we have prepared, but from discussions with fellow students. So, no matter what your level of knowledge, or  your point of view on man-made climate change might be, please join us. I’m looking forward to learning from this course, too.

All anyone needs is an Internet connection, a desire to learn and share your knowledge, and an ability to understand English spoken in American, British, Canadian and Australian accents.

END_OF_DOCUMENT_TOKEN_TO_BE_REPLACED

George Marshall has written a book that is essential reading for everyone interested in communicating the science of climate change and its urgent policy implications. Don’t Even Think About It: Why Our Brains Are Wired to Ignore Climate Change comprises 43 short and well-written chapters that explain why  strenuous efforts to spread the word and spur action on climate change have failed. 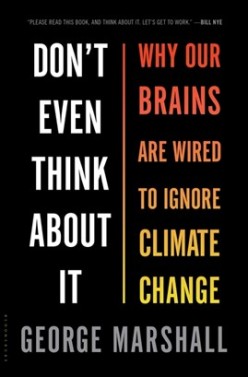 There is no question that the problem is far from licked: the Keeling Curve continues its upward rise; American conservatives remain stuck in an intellectual dead end on climate; other countries pay lip service to the threat while making only token gestures to solve it; every year there is a big international get-together at COP meetings where thousands of delegates gather to push the policy boulder up Sisyphus’ hill, only to watch it roll down again. Opinion polls, it is true, show that there is broad public acceptance of the scientific basis of climate change, but the understanding of the problem is shallow. People say they care about climate change, but when it comes time to vote, other issues loom larger.

Marshall has worked for 25 years as a campaigner in environmental movements, including Greenpeace US and the Rainforest Foundation. He is a co-founder of the Climate Outreach Information Network, a UK based charity committed to ensuring that climate change and its impacts are understood and acted upon. END_OF_DOCUMENT_TOKEN_TO_BE_REPLACED

Nobody comes into this world with a fully-formed opinion on anthropogenic climate change. As we learn about it, we change our minds. Sometimes, changing your mind can be easy and quick; sometimes it’s hard and slow. This is an anecdotal and subjective account of the author’s changes of mind.