The 97% consensus on anthropogenic global warming (AGW) reported by Cook et al. (2013) (C13) is a robust estimate. Alternative methods, such as James Powell’s, that identify only explicit rejections of AGW and assume that all other instances are endorsements, miss many implicit rejections and overestimate the consensus.

The C13 method can be modified and used to estimate the consensus on plate tectonics in a sample of the recent geological literature. This limited study—not surprisingly to anyone familiar with the field—produces a consensus estimate of 100%. However, among the abstracts that expressed an opinion. only implicit endorsements of the theory were found: this underlines the importance in consensus studies of identifying implicit statements. The majority of the abstracts expressed no position. Assuming that these cases suggest either uncertainty about, or rejection of, plate tectonics (as some critics of C13 have claimed about AGW) would lead to the absurd conclusion that the theory is not widely accepted among geologists.

Opinion surveys show that the public is misinformed about true state of consensus among climate scientists, with only a minority aware that it is greater than 90%. The difference between 97% and 99.99% is tiny compared to this gap. The 3% of published papers that reject AGW are contradictory and have invariably been debunked. They do not therefore provide a coherent alternative account of climate science. Despite this, dissenters are awarded disproportionate attention by ideologically and commercially motivated interests, as well as by false balance in the media. Countering this public confusion requires both communicating the consensus and debunking bad science.

For a shorter summary than the one below, read Dana Nuccitelli’s Guardian piece: Is the climate consensus 97%, 99.9%, or is plate tectonics a hoax? END_OF_DOCUMENT_TOKEN_TO_BE_REPLACED

There has been a spate of blog articles in recent weeks by Michael Tobis, And Then There’s Physics Victor Venema and Eli Rabett. In part this was sparked by an article in the New York Times misleadingly titled There is no Scientific Method. I’m far from a philosopher of science, so what follows is not rigorous or complete, it’s just some idiosyncratic and random stuff I’ve picked up along the way.

I’ve never been much of a method person. I work haphazardly, with an untidy desk and a short attention span, going from uncompleted thought to thought. When I read a scientific paper, I jump all over the place, starting with the conclusions, then trying to decipher the diagrams, looking at the supplementary material, then, as a last resort, I’ll read the introduction and abstract.

To be sure, I’m eventually capable of providing a logical and orderly explanation of my thinking, but it’s a fiction that describes the shortest path between question and answer, rather than describing the random walk I had been on.

I was always thrown off-balance during my business career if, when I was proposing a project idea, somebody would ask “what’s the process here?”,  mainly because I had no clue how to answer. Being forced to attend meetings that contain flowcharts of process, with diamond-shaped, rectangular and elliptical boxes was a torture. My world didn’t work like that and never will. Process always seemed to me to be a barrier to getting things done, often promoted by people who never contributed much in the way of new ideas.

Nevertheless, I did take some early interest in the philosophy of science. The first eye-opener was reading Bryan Magee’s book on Karl Popper, a very clear and short description of Popper’s epistemology. The lack of symmetry between proof (impossible) and falsification (sometimes possible) came as a minor revelation. Popper’s demarcation between science (falsifiable) and non-science (not falsifiable) struck me as reasonable, although I have later come to realize that the world of knowledge is a lot more fuzzy than that. Nevertheless, like the famous eroticism/pornography demarcation, you usually know it when you see it. END_OF_DOCUMENT_TOKEN_TO_BE_REPLACED

It’s probably obvious from the weird eyes and barely coherent ramblings that Sarah Palin’s brainwashing in Skeptical Science’s secret prison has done some permanent damage. We’re sorry. Nevertheless, she did get one of  her programmed lines nearly right:

“…if 97% of scientists believe that man’s activities are creating changes in the weather then who am I to question that?”

The original programmed line had “conclude” rather than “believe” and “climate” instead of “weather”, but we are new to this. We promise to do a better job once we get hold of The Donald.

Seriously, take seven minutes to watch the whole clip from Jimmy Kimmel. He does a great job. The scientists speaking at the end are very funny.

In 1998 and 1999, American scientists Michael Mann, Raymond Bradley and Malcolm Hughes published two papers that reconstructed the average temperatures of the northern hemisphere back to the year 1000. The articles showed a temperature profile that gently declined from 1000 to 1850, fluctuating a little along the way, with a sudden increase in the late nineteenth and the twentieth centuries.  The graph was nick-named “the Hockey Stick”, with its long relatively straight handle showing the stable pre-industrial climate and the blade representing the sudden uptick in the last 150 years.

The diagram was a striking depiction of the abrupt warming that had occurred since the Industrial Revolution compared to what happened before. For those opposed to the scientific consensus on Anthropogenic Global Warming (AGW), the Hockey Stick posed a threat and had to be broken. END_OF_DOCUMENT_TOKEN_TO_BE_REPLACED 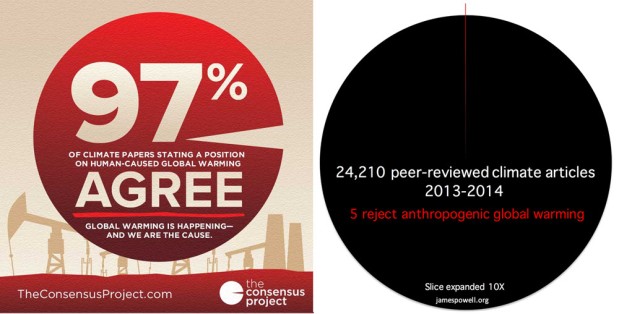 In a recent article in Skeptical Inquirer, geologist and writer James Lawrence Powell, claims that there is a 99.99% scientific consensus on Anthropogenic Global Warming (AGW). You might think that after all of the harsh criticism that the 2013 Cook et al. paper (C13) has received from climate contrarians that we would be pleased to embrace the results of a critique that claims we were far too conservative in assessing the consensus. While it certainly does make a nice change from the usual rants and overblown methodological nit-picks from the contrarians, Powell is wrong to claim such a very high degree of agreement.

He makes many of the same errors that contrarian critics make: ignoring the papers self-rated by the original authors; and making unwarranted assumptions about what the “no-position” abstracts and papers mean.

Powell’s methodology was to search the Web of Science to review abstracts from 2013 and 2014. He added the search term “climate change” to the terms “global climate change” and “global warming” that were used by C13.  He examined 24,210 papers co-authored by 69,406 scientists and found only five papers written by four authors that explicitly reject AGW. Assuming the rest of the abstracts endorsed AGW, this gives consensus figures of 99.98% (by abstract) and 99.99% (by author).

His definition of explicit rejection would align roughly with the seventh level of endorsement used in C13: “Explicitly states that humans are causing less than half of global warming” . In the abstracts from 1991-2011, C13 found 9 out of 11,914 that fit level 7, which using Powell’s consensus calculation assumptions, would yield 99.92%. So, there is probably not much difference between the two approaches when it comes to identifying an outright rejection paper. It’s what you assume the other abstracts say—or do not say—that is the problem.

C13 also counted as “reject AGW” abstracts that: “Implies humans have had a minimal impact on global warming without saying so explicitly, e.g., proposing a natural mechanism is the main cause of global warming”. These are more numerous than the explicit rejections and include papers by scientists who consider that natural causes are more important than human causes in recent warming, but who do not outright reject some small human contribution.

Competing Climate Consensus Pacmen. Cook on the left, Powell on the right.

END_OF_DOCUMENT_TOKEN_TO_BE_REPLACED 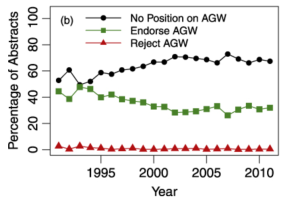 One of the surprises I had when I was involved in the Cook et al (2013) paper was how many abstracts there were that hardly mentioned anthropogenic global warming. This was despite them having been selected using the key words global climate change and global warming.  When we got to the stage of tabulating and plotting the ratings over the 1991-2011 period, what was even more surprising, to me, was that the proportion of abstracts that took No Position (NP) actually rose from about 50% in the early 1990s to about 65% in 2002, after which that proportion stayed more or less the same for nine years. It wasn’t immediately obvious to me how this squared with the increasing knowledge and generally reduced uncertainties expressed in successive IPCC reports. 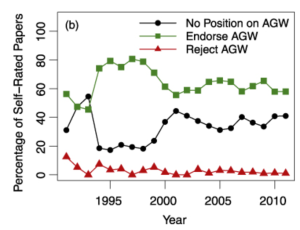 The other investigation we did was to ask the authors of the articles to rate their papers on the same scale. Here the overall percentage of NP was lower, about 35%. Not all authors responded to our email queries, so the sample size is smaller than for the abstracts. Also, it was harder to track down email addresses for researchers in the early 1990s, so the sample is particularly small then. Nevertheless, the rising proportion of NP papers is if anything a little more marked here, rising from around 20% in the 1994-1999 period to around 35-40% in the 2001-2011 period.

The difference between abstract and paper NP proportions is not surprising: the abstracts are reserved for key results and the available space there tends not to be wasted telling everyone what the prevailing paradigm is. Also, as confidence in the paradigm grows over time, a larger proportion of  papers might consider the attribution of global warming to be an established fact and not something that needs to be endorsed even in the body of the paper itself.

We might well expect to see the same thing in other subjects: for example, life scientists no longer need to affirm evolution through natural selection, it has become settled science; geologists take plate tectonics for granted today, although they would not have in the 1960s when there was a scientific revolution underway. Rising NP proportions in climate science papers, contrary to intuition, might well signify rising confidence among researchers that human emissions are a main cause of global warming—something that just does not have to be reaffirmed every time the subject of changing modern climates is discussed. END_OF_DOCUMENT_TOKEN_TO_BE_REPLACED