Communicating the complexities of climate science is difficult, but the problem is hardly new. In my career in oil exploration, communicating uncertainty to decision makers was every bit as challenging. With any exploratory well, you don’t know how much oil you will find, you don’t even know if you will find any at all.

We would do sophisticated Monte Carlo analysis on expected field sizes (we called this uncertainty), statistics on past experience, and use Delphi methods to determine more subjective measures, such as the overall chance of success (we called this risk). Occasionally we would even venture into probabilistic economic analysis, with input distributions of things like oil prices, variations in costs or possible future changes in royalties and taxes. It all got complicated very quickly.

Although complex analysis helped us—the technical team—grasp our material better, the intricate results were almost impossible to communicate in full to outsiders. Most decision-makers wanted just a few numbers: the chance of success, the average expected field size, the profitability. You just had to keep it simple. And it never helped sell a prospect if you reframed a 25% chance of success as a 75% chance of failure.

The worst were the drilling engineers. It was part of my job to provide a forecast of the depth at which key horizons would be encountered while drilling. There is considerable uncertainty involved in such estimates: identifying reflection events on seismic sections can be imprecise and the conversion from seismic travel time to depth requires a good knowledge—something you don’t always have—of acoustic velocities in the overlying rocks. However, it is not hard to estimate drilling depth forecast uncertainties using Monte Carlo methods. But the men in charge of drilling (there are never women in this job) would hear no talk of uncertainty, regarding it as a rather lame form of ass-covering in their binary universe of only right and wrong. They considered geophysicists to be shifty and overpaid and would demand one god-damned number, although not always that politely. 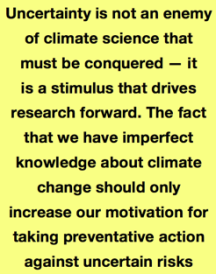 Nevertheless, throughout the industry, it was accepted that choices had to be made under deep uncertainty. Once in a while, the right decision would be to wait-and-see, or to get more data. But, more typically, everyone knew that dithering was not an option. Repeatedly claiming that there were too many uncertainties to place your bet would mean that you were effectively handing over opportunities to the competition.

Furthermore, the smarter decision makers always had an eye for the fat tail of the probability distribution: the elephant oil field, the blockbuster movie, the one-in-a-hundred outcome that earned five-hundred times the average profit. Major success is only encountered where uncertainty is large. Uncertainty is not an obstacle, it’s the essence of opportunity.

Which is why it is odd that some climate contrarians, often dubbing themselves practically-minded businessmen, claim that the levels of uncertainty that exist in climate science would never be tolerated in industry as a satisfactory basis for decision-making. This is nonsense. Uncertainties involved in most important commercial decisions are bigger than they are in the climate science that underlies policy decisions. I suspect that this type of contrarian is either not in business at all or, if he is, he is probably employed in some back-room, bean-counting role, rather than at the cutting edge of exploration or new product design.

Some good advice in the Handbook

Here are a few snippets. They speak for themselves.

And one last one, in which I don’t quite agree with the “insurance” analogy.

Insurance is where you pay for someone else to take a risk for you. Nobody can cover the risk of planetary loss, there’s no Mars Re reinsurance company and, even if there were, no hard-nosed Martian businessman would sell fire insurance to an out-of-control bunch of Earthling arsonists. In any case, serious global climate change is not something that you could claim adequate compensation for.

A better analogy might perhaps be the decision to invest in replacing decades-old electrical wiring in your home. Doing it will certainly be expensive and disruptive for a while, but it will add value and reliability and, most importantly, it will greatly reduce the chance of your house burning down.

Quibbles like that aside,  The Uncertainty Handbook is a great read. Even if you are a diehard anthropogenic-climate-change-denying oil explorer, you might well find some insights that help you sell your risky exploration prospect to your boss.

4 thoughts on “Unsure about how to talk about uncertainty? Read this”