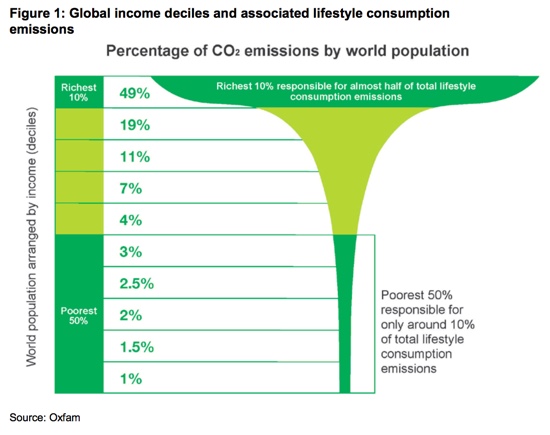 In the first part of this series, I examined the implications of relying on CCS and BECCS to get us to the two degree target. In the second part, I took a detailed look at Kevin Anderson’s arguments that IPCC mitigation scenarios aimed at two degrees are biased towards unproven negative-emissions technologies and that they consequently downplay the revolutionary changes to our energy systems and economy that we must make very soon. In this last part, I’m going to look at the challenges that the world faces in fairly allocating future emissions from our remaining carbon budget and raising the money needed for climate adaptation funds, taking account of the very unequal past and present.

Until now, economic growth has been driven and sustained largely by fossil fuels. Europe and North America started early with industrialization and, from 1800 up to around 1945, this growth was driven mainly by coal. After the Second World War there was a period of rapid (~4% per year) economic growth in Europe, N America and Japan, lasting about thirty years, that the French refer to as Les Trente Glorieuses, The Glorious Thirty. This expansion was accompanied by a huge rise in the consumption of oil, coal and natural gas. After this there was a thirty-year period of slower growth (~2%) in the developed economies, with consumption fluctuations caused by oil-price shocks and the collapse of the Soviet Union. During this time, oil and coal consumption continued to grow, but not as steadily as before. Then, at the end of the twentieth century, economic growth took off in China, with a huge increase in the consumption of coal.

Source of the emissions data is from the CDIAC. See the SkS post The History of Emissions and the Great Acceleration for further details.

If we are to achieve a stable climate, we will need to reverse this growth in emissions over a much shorter time period, while maintaining the economies of the developed world and, crucially, allowing the possibility of economic growth for the majority of humanity that has not yet experienced the benefits of a developed-country middle-class lifestyle.

Here are the the annual emissions sorted by country and region:

From Chancel and Piketty (2015) END_OF_DOCUMENT_TOKEN_TO_BE_REPLACED

It’s all too easy to carp about the Paris COP agreement. There’s no global carbon tax. It is all pledges and good intentions. The sum total of those promises falls far short of the 2 C goal and far, far short of the 1.5 C aspirational target. The agreement contains some provisions for measuring progress in transparent ways, but it is not legally binding. There is no provision for sanctioning governments that fail to deliver. As my MP, Elizabeth May, has said of environmental treaties in general: “Trade treaties have teeth, environmental treaties only gums”.

Still, there is much to celebrate.

This is what a turning point looks like. This is what a first step in the right direction looks like. We have waited for a long time for this, too long of course, but now that it has happened we should cheer this agreement. It brings together all of the governments of the world, in a diplomatic agreement focussed on the monumental problem of climate change. The French convenors deserve our thanks and praise for their stamina and patience in herding all of these cats to a common goal.

Now it’s up to the national governments to implement their promises. END_OF_DOCUMENT_TOKEN_TO_BE_REPLACED