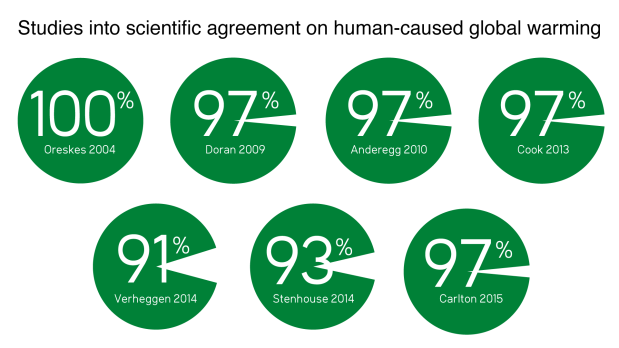 The 97% consensus on anthropogenic global warming (AGW) reported by Cook et al. (2013) (C13) is a robust estimate. Alternative methods, such as James Powell’s, that identify only explicit rejections of AGW and assume that all other instances are endorsements, miss many implicit rejections and overestimate the consensus.

The C13 method can be modified and used to estimate the consensus on plate tectonics in a sample of the recent geological literature. This limited study—not surprisingly to anyone familiar with the field—produces a consensus estimate of 100%. However, among the abstracts that expressed an opinion. only implicit endorsements of the theory were found: this underlines the importance in consensus studies of identifying implicit statements. The majority of the abstracts expressed no position. Assuming that these cases suggest either uncertainty about, or rejection of, plate tectonics (as some critics of C13 have claimed about AGW) would lead to the absurd conclusion that the theory is not widely accepted among geologists.

Opinion surveys show that the public is misinformed about true state of consensus among climate scientists, with only a minority aware that it is greater than 90%. The difference between 97% and 99.99% is tiny compared to this gap. The 3% of published papers that reject AGW are contradictory and have invariably been debunked. They do not therefore provide a coherent alternative account of climate science. Despite this, dissenters are awarded disproportionate attention by ideologically and commercially motivated interests, as well as by false balance in the media. Countering this public confusion requires both communicating the consensus and debunking bad science.

For a shorter summary than the one below, read Dana Nuccitelli’s Guardian piece: Is the climate consensus 97%, 99.9%, or is plate tectonics a hoax? END_OF_DOCUMENT_TOKEN_TO_BE_REPLACED

Norway is one of the most wealthy countries on Earth, with the very highest levels of human development, it is among the most generous donors of foreign aid and, for a country of its size, makes enormous efforts to promote peace. A former Prime Minister of Norway, Gro Harlem Brundtland, has done as much as anyone to promote global sustainable development and public health. The world would surely be a better place if everyone on Earth behaved like Norwegians.

Norway, on the other hand, is also the largest per capita oil producer outside of the Middle East, producing more oil per capita even than Saudi Arabia, about 150 barrels per person per year from its fields in the North Sea. Five million Norwegians also emit 11 tonnes of greenhouse gasses each per year, a little higher than the European mean and twice as high as the global average. The world would surely become uninhabitable if everyone on Earth behaved like Norwegians.

END_OF_DOCUMENT_TOKEN_TO_BE_REPLACED

It is not news that people are polarized over their assessment of the risks posed by climate change. But is it true that the most polarized people are those who are more scientifically literate? Counter-intuitive though it may seem, the answer is: Yes, it is. This is the result of a recent article by Dan Kahan and six colleagues in Nature Climate Change (henceforth, the Kahan Study).  This study has received a lot of attention, with blog articles, for example in The Economist, Mother Jones and by David Roberts at Grist.

At Skeptical Science, our goal is to debunk false arguments and explain the science behindclimate change. In the light of this peer-reviewed research, we have to ask ourselves: if we are striving to increase scientific literacy, won’t we just be making the polarization that exists aroundclimate change worse?  We will come back to that question at the end of this piece, but first, we’ll look in some detail at the Kahan Study itself.