This article was originally posted at Skeptical Science on April 20th, 2015

We have good reason to be concerned about the potential for nasty climate feedbacks from thawing permafrost in the Arctic. Consider:

But exactly how bad will it be, and how quickly will it cause problems for us? Does the latest research bring good news or bad?

Ted Schuur and sixteen other permafrost experts have just published a review paper inNature: Climate change and the permafrost feedback (paywalled). This long and authoritative article (7 pages of text, plus 97 references) provides a state-of-the-art update on the expected response of permafrost thawing to man-made climate change. Much of the work reported on in this paper has been published since the 2013 IPCC AR5 report. It covers new observations of permafrost thickness and carbon content, along with laboratory experiments on permafrost decomposition and the results of several modelling exercises.

The overall conclusion is that, although the permafrost feedback is unlikely to cause abrupt climate change in the near future, the feedback is going to make climate change worse over the second half of this century and beyond. The emissions quantities are still uncertain, but the central estimate would be like adding an additional country with the unmitigated emissions the current size of the United States’ for at least the rest of the century. This will not cause a climate catastrophe by itself, but it will make preventing dangerous climate change that much more difficult. As if it wasn’t hard enough already.

There’s a lot of information in this paper and, rather than attempt to describe it all in long form, I’ll try to capture the main findings in bullet points.

The carbon content in the top three metres of permafrost soils. From Hugelius et al (2013).

Some permafrost soils have been incubated in controlled conditions in extended experiments lasting as long as twelve years to see how quickly they emit carbon dioxide and methane. Some key results:

There has been a large amount of public interest directed at the East Siberian Arctic Shelf, largely because of claims that the area could be the site of a ten-year 50 PgCH4 emission. This scenario has been widely criticized. Chris Colose summarized many of the arguments in his post Toward Improved Discussions of Methane & Climate. Schuur et al. appear to endorse this view:

Degradation of subsea permafrost from above by climate warming, and also from below by ongoing geothermal heat, will tend to increase new pathways between CH4 storage areas deeper in the sediments and the sea floor. But it is not known whether meaningful increases in CH4 emissions via these processes could occur within this century, or whether they are more likely to manifest over a century or over millennia. What is clear is that it would take thousands of years of methane emissions at the current rate [0.0017 PgCH4/year] to release the same quantity of methane (50 Pg) that was used in a modelled ten-year pulse to forecast tremendous global economic damage as a result of Arctic carbon release , making catastrophic impacts such as those appear highly unlikely.

Here are the main conclusions of Schuur et al.:

How big of a deal is this?

Big numbers can be hard to grasp and it’s easy to get lost among the PgCs, the TgCO2s and the GWPs. Let’s assume that the permafrost emissions this century amount to 145 PgC (billion tonnes) of carbon. If these were all in the form of carbon dioxide, they would amount to 530 PgCO2. I will try to show in the comparisons below how significant these permafrost emissions might be. Note that these are my own calculations, comments and examples, not Schuur et al.’s.

The 145 PgC emissions are for the RCP8.5, the worst-case human emissions scenario.Permafrost decomposition would be smaller at any given time in a less quickly warming world. For example, MacDougall et al (2012) found that emissions in 2100 under RCP2.6 (the aggressive mitigation scenario) would be ~40% of their estimate under RCP8.5. Applying this fraction to Schuur et al.’s estimate would yield 2100 emissions of about 60 PgC (220 PgCO2) under RCP2.6. This is a rough estimate for comparison purposes only and has not been calculated by Schuur et al.

1. The USA in 2013 emitted 5.2 billion tonnes of carbon dioxide from fossil-fuel combustion. Sustained over a century, such a rate of emissions would add up to match the emissions from the permafrost over the same timeframe. The permafrost feedback is almost as if we had conjured up a new USA, whose emissions would persist for a century or more. Admirers and detractors of America will surely agree, if only from a climate point of view, that one USA in the world is enough.
2. The established bitumen resource in the Athabasca oil sands is approximately 169 billion barrels. To produce all of this bitumen by the end of the century, would require rapid growth beyond even the industry’s most ambitious plans. Swart and Weaver (2012) estimated that the total carbon in the established bitumen resource would be about 22 PgC. This is less than one-sixth the carbon expected to be emitted from permafrost over the same time frame. Canada is therefore likely to emit more CO2 from its share of the permafrost than would be produced even in a hell-for-leather exploitation of the oil sands.
3. The RCP2.6 pathway is the only one of the four modelled emissions scenarios that keeps warming below the 2°C target. The socio-economic model chosen to underpin this emission pathway (van Vuuren et al, 2011) relies heavily on carbon capture and storage (CCS) technology. In particular, a large deployment of bio-energy CCS (BECCS) is required for the latter half of the century, mostly to compensate for future natural gas and oil emissions that cannot be captured and sequestered. Deploying BECCS on this scale will pose problems for competing uses for agricultural land as well as for areas set aside for forest and wild-land preservation. 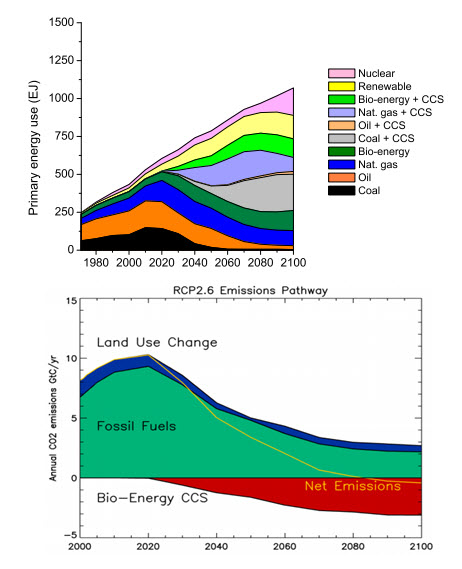 The top figure comes from van Vuuren et al (2011) and shows the primary energy sources for the RCP2.6 scenario. The lower figure (from a presentation by Andy Wiltshire) is based on the same model and shows the amount of BECCS negative emissions required after 2020 to stay under 2°C .

The amount of BECCS carbon sequestered in the century is 176 GtC, a little larger than the projected permafrost emissions under RCP8.5 and three times the estimated emissions under RCP2.6. Since permafrost emissions are not currently included in IPCC models, this means that—in order to preserve the same atmospheric greenhouse gas concentration profiles in the current RCP2.6 pathway—the amount of BECCS deployed would have to increase by one-third. An already very challenging mitigation strategy that relies on net negative emissions for the final decades of this century becomes even more difficult once permafrost feedbacks are considered.

4. The carbon budgets to limit our chances of avoiding 2°C look like this:

Permafrost emissions this century of 60GtC/220 GtCO2 (assuming slower thawing under an aggressive mitigation pathway) need to be subtracted from those remaining budget figures. Also, the graph above does not include the emissions from 2013 and 2014, which would subtract another roughly 20GtC/70 GtCO2. This means that our budget from fossil fuels and land use changes needed to give us a good chance of avoiding dangerous climate change reduces from about 1000 GtCO2 to 700 GtCO2. The fraction of fossil fuel reserves that we have to leave in the ground just got significantly bigger.

In summary, these projected permafrost emissions are a very big deal. The Schuur et al. paper contains good news, in so far as an abrupt permafrost climate feedback is unlikely according to the experts, but the bad news is that the already difficult task of keeping warming under 2°C becomes much harder once we face up to the consequences of Arctic permafrost feedbacks.

It is a great pity that permafrost emissions estimates are not yet incorporated in all climate models. Just because the emissions are uncertain does not mean that they should be excluded, after all, projections of fossil-fuel emissions are probably even more uncertain.

It is also a shame that important papers like this one are kept behind a publisher’s paywall. The important policy decisions that need to be made to ensure a habitable planet require support from citizens informed with the latest and most reliable information.

Feel free to comment here, but first check out the comments at Skeptical Science. You will reach a bigger audience if you comment there instead of here.