The publication of the paper that I co-authored, Quantifying the consensus on anthropogenic global warming in the scientific literature,  in May 2013 caused quite a splash. The paper received a lot of positive coverage, including Tweets from Barack Obama, Al Gore and Elon Musk.  (They didn’t always get the details quite right: our survey was of the literature, not of scientists’ opinions and we had nothing to say about how dangerous climate change would be.) The paper has been downloaded, as of June 2nd 2014, 183,335 times, which is a record for any Institute of Physics paper. The editorial board of the journal, Environmental Research Letters, awarded the paper the “Best article of 2013” prize.  The research for the paper was done by a team of unpaid non-specialist volunteers of students and industrial and academic scientists, along with other enthusiasts and the funding for its publication was raised by donations from Skeptical Science readers. No taxpayers were harmed during the making of this article. 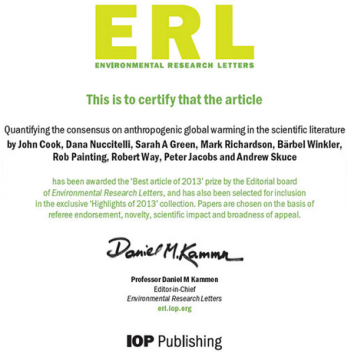 Not everybody was pleased to see our work in print. In particular, many people who are unconvinced of the urgency to act on mitigating climate change have been claiming that our study is flawed and biased. Even somebody like economist Richard Tol—who accepts that global warming is real and caused by humans and who acknowledges that there is an overwhelming scientific consensus—has made extraordinary efforts over the past year to get a critique published. He finally succeeded, with the paper Quantifying the consensus on anthropogenic global warming in the literature: A re-analysis published in the journal Energy Policy,. The journal editors somehow came to believe that this article fell within its scope of  being “an international peer-reviewed journal addressing the policy implications of energy supply and use from their economic, social, planning and environmental aspects“.

Energy Policy was good enough to give us a chance to respond, which we did with this short paper, which has now (June 21, 2014) been  published. We were only allowed 1000 words, however, so we wrote a much longer article, published on the Skeptical Science website, detailing the 24 errors that Professor  Tol made.

Somebody (I have no idea who this person is) anonymously uploaded a short paper that harshly criticized part of Tol’s analysis. Tol quickly replied. However, the easiest criticism of Tol’s estimation of the consensus at 91% is that this requires that there are 300 more abstracts in our sample that we somehow missed. I examined a big chunk of the 12,000 abstracts myself and I know that those 300 AGW rejection abstracts do not exist. It would be easy for anyone to prove me wrong, just point to them, the data we used are all freely available.

Why do people like Richard Tol  try so hard to dispute a paper whose central conclusion they broadly accept? Why do denialist pundits keep claiming that our consensus paper is flawed when their champion himself admits that we were not so much wrong as merely stating the obvious :

By the way, I’m not accusing [Financial Times journalist] Mr. Giles of being a hired gun for the plutocracy, although there are some self-proclaimed experts who fit that description. And nobody’s work should be considered above criticism. But on politically charged issues, critics of the consensus need to be self-aware; they need to ask whether they’re really seeking intellectual honesty, or are effectively acting as concern trolls, professional debunkers of liberal pieties. (Strange to say, there are no trolls on the right debunking conservative pieties. Funny how that works.)

I don’t know what motivates Professor Tol, but claims that he is acting out of concern for propriety and professional standards ring hollow when you examine his own track record. For example, read the sorry history of the Tol-Ackerman dispute and the extraordinary open letter to Tol written by a long list of distinguished economists, or the recent article by Andrew Gelman and the discussion that follows.

A recent report by the Yale Project on Climate Change Communication contains the following graphics:

When Professor Tol claims that: “The consensus is of course in the high nineties. No one ever said it was not.”  he is seemingly unaware that in fact only 12% of Americans agree with him. Of course, as  researchers like Dan Kahan have demonstrated, there are huge cultural influences determining what Americans allow themselves to believe and it is not sufficient to keep repeating facts to change people’s minds. But not all of the “consensus gap” is a result of cultural bias.

Based on research by John Cook.

Even those on the extreme left of the political spectrum think that there is less scientific agreement than there actually is. If we can help close the blue part of the consensus gap, we will have made some progess, at least.

Professor Tol’s paper makes a direct reference in a footnote to something that I wrote in a private discussion.

Putting aside, for now, the shabby ethics of citing stolen material, this interpretation of what I said is false.  The quote was part of a discussion that a couple of us working on the project were having about our impressions that some of the abstracts in the sample were repeated. We were not sure if those impressions were real or whether they arose from having read hundreds of abstracts over several days and not remembering each one exactly. We had no way of checking the database for ourselves and we alerted John Cook so that he could investigate further. The notion that I was concerned about the effect of  “fatigue ” on the quality of my work is quite false and this is obvious to anyone who reads the quote in context.

I will be asking the editor of Energy Policy to correct this error and to remove any references to stolen private discussions in Professor Tol’s paper. It is surprising and disappointing that the reviewers and editorial staff of the journal did not spot this.

Other blogposts and news items (will be updated):

Eli Rabett In the Spirit of Deep Climate

Hot Whopper BUSTED: How Ridiculous Richard Tol makes myriad bloopers and a big fool of himself and proves the 97% consensus