This a rather personal rant about the recent referendum in Britain on the EU. There’s really nothing to do here with climate change, energy or science, so this is off-topic for this blog. I really have little to add to the many excellent commentaries about what this means for the economy. Read Martin Wolf in the Financial Times (Google the headline  “Martin Wolf Brexit will reconfigure the UK economy”to get around the paywall).

You have been warned. This is more personal impression than objective analysis. More anecdote than data.

The Brexit decision hit me in the gut. I’m saddened by the way my generation and my parents’ generation has suddenly reversed a trend towards peace, prosperity and openness in Europe. I feel oddly complicit in younger generations being denied the opportunity that my generation experienced as a result of dissolving frontiers and a chance to identify with an expanded European identity.

I’m of the Baby Boom generation, born in England in 1954. It was an excellent time and place to choose to be born. Like many other members of my generation, I can’t remember when my family did not have a car, telephone, central heating, washing machine or telephone. Sometime in the mid-sixties, we started going on camping holidays in Europe, to France, the Bavarian Alps, Switzerland and the Spanish Costa Brava. Previous generations of my family had only visited Europe to fight in wars.

I have been fortunate indeed to have lived through a long period of peace and prosperity. I attended university—the first person in my family ever to do so—in the early seventies. All of my tuition and living expenses was paid for by the government and my parents. When I graduated in 1975, I owed £50 to my father, which he forgave. Summer jobs were easy to come by. I worked one summer as road sweeper and another shovelling swarf in a steel mill in Sheffield. A few weeks’ work was enough to pay for climbing holidays in the Alps, hitch-hiking to Chamonix and Switzerland to engage in some great adventures with my mates.

University education is now more widely available. All of my nephews and nieces have degrees, but they are saddled with debts and face a much tougher employment marketplace, even for crappy jobs.

I emigrated to Canada in 1981, drawn partly by the prospect of a good job in Calgary and because I would be living just an hours’ drive away from one of the world’s great mountain ranges. But, also, I had decided to quit my job at the British Geological Survey in Edinburgh, which was being turned into a quasi-industrial consultancy by the Thatcher government. It seemed to me better to work for industry directly, rather than indirectly as an underpaid civil servant. I was an economic migrant, seeking a better life. Canada has always made me feel welcome. I feel lucky and grateful.

While living in Scotland in 1979, I voted “No” in the first referendum on Scottish independence. Mainly, I was motivated by an aversion to what I saw as petty nationalism. I’m happy to call myself British, since that encompasses my Welsh, English and Irish roots. My uncommon surname, Skuce, is Cornish. Moreover, “British” is a category that accepts and benefits from the inclusion of the many immigrants to Britain, people who have enriched and diversified the national culture. “English” has always seemed such a narrow, exclusive identity and not one that I can identify with. At the time, Scottishness seemed equally petty, but I credit the recent Scots with becoming more inclusive.

In the late 1980s and early 1990s, I was fortunate to be posted to work in Vienna for over three years. This was an extraordinary time to be living in central Europe. The Eastern Bloc had just fallen apart and it was easy to visit Czechoslovakia, Hungary and Yugoslavia. The newly open borders also meant that were a lot of migrants coming to Vienna and there was a great deal of resentment and fear among the Viennese, as the city seemed to them to be swamped by foreigners. I recall the weird slogan from the right-wing Freiheit party: Wien darf  nicht Chicago werden (Vienna must not become Chicago), linking the migrants, mostly falsely, to an increase in crime. Austria is in many ways a wonderful country, but there is a strong element of xenophobia there. As a resident, I experienced it first-hand, although never to the degree that the poor migrants from eastern and south-eastern Europe or North Africa did.

At the time, Austria was not yet a member of the EEC—as it was then called—but Britain was. When travelling with Austrian colleagues on business, EEC passport holders like me breezed through fast-track immigration controls in France, Germany and Italy, while the Austrians had to line up with the huddled masses from Eastern Europe and elsewhere. Even though Austria was at the time a proudly independent nation, the draw of becoming a full member of the European club was obviously irresistible. Getting to line up with the other western Europeans instead of the great unwashed was, I am sure, at least a minor factor in pushing Austrians to join in 1993.

I’m married to a Frenchwoman, have learned enough of the language to get by and am pleased to have acquired a family and friends in France. That has enriched my view of the world. More fantastic good luck.

This is all rather a long preamble to me declaring my own identity as British, Canadian and European. I was devastated to hear of the results of the recent referendum. This threatens my British identity, since Scotland may now, quite justifiably, decide to separate from England. I’ll still consider myself culturally a European, even if my future English passport no longer allows me to travel freely and settle in Europe. But that’s not really why the vote saddens and outrages me. It’s because the English people of my generation and older have turned their backs on one of the great projects of human civilization—a full seventy years of peace and prosperity in Europe—for the most base of reasons.

I’m feeling rather disgusted with my English roots after this vote. This is why.

The English tabloid press is a disgrace. Nowhere else in the world is such trash widely circulated and tolerated by the population at large. I’m sure that Russian and Chinese newspapers are equally capable of producing equally distorted and deceitful content, but English journalists are professionals free to write whatever they like and the English public has a choice to read whatever paper they want to. There’s no excuse for this, it’s quite simply a cultural and moral failing.

The paranoia over migrants extends to people making absurd comparisons, for example, between Angela Merkel and Adolph Hitler. This is not just some hyperbolic excess blurted out by people who have had one drink too many, but I’ve heard it declared in all seriousness by sober people who ought to know better. If it were true, then anyone sympathetic to the supposedly megalomaniacal Ms Merkel and the EU would become a justifiable target of violent action. It’s not too much of a stretch to argue that Jo Cox, the politician murdered by a nutcase, was at least partly the victim of the stupid and wicked language of people who want to leave the EU. The English pride themselves on their common sense, restraint and decency, but they have let themselves down. Badly.

I understand that many feel overwhelmed by the rapid changes in society. Especially, as you get older, the changes seem to be spiralling out of control. Ethnic food shops and restaurants on the High Street replace the old businesses like ironmongers and greengrocers. Everybody on the bus seems to be jabbering away in different  languages. There’s gay sex on the telly. The NHS waiting rooms seem to be full of foreigners. At the same time, a larger proportion of the doctors and nurses is made up of migrants than is the general population.

There are many parts of Britain that have been hit hard by the deindustrialization associated with globalization. Once proud and self-reliant communities that made a decent living through mining and metal bashing are depressed and on the dole. This trend isn’t new—it started in the 1970s—but the young people who live there have no memory of better times. They may understandably feel left behind by the economic growth that has benefitted educated workers in big cities. This is not just a problem in Britain, of course. It is true, as David Ricardo argued long ago, that free trade brings a net benefit to all sides. However, big parts of our societies have been left behind. Cheaper clothes, phones and TVs don’t make up for a life without dignified employment. Politicians everywhere seem to have no answer for this and I can’t blame the left-behind for voting as if they have nothing to lose. They haven’t, really.

The statistics show that Brexit voters tend to be older, poorer, less educated and belong to lower socio-economic classes. They also tend to live outside London and Scotland. 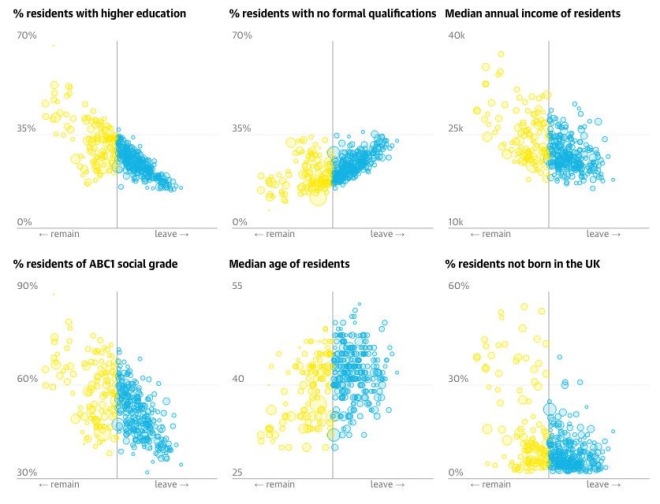 The Leave voters also tend to live areas where there are fewer migrants. This shows that resentment of migrants is based more on tabloid-induced fear than everyday reality.

Of course, the EU is not above criticism. The premature adoption of the Euro, in particular, has been a disaster. You can’t have a currency union without a full political union. The response to the national near-bankruptcies on the European southern fringe has been a disgrace. Reckless Mediterranean borrowers are vilified and punished, while their greedy lenders (banks in Northern Europe) who sought higher yields without regard to default risk are quietly bailed out.

The young don’t escape all responsibility. Although the statistics are not clear, it seems that voting participation was much lower among those younger than 35 than among the middle aged and old. Wake the fuck up.

It’s not too late to turn this around. Demonstrations and political mobilization led by the young in favour of free trade, open borders, reduced inequality, tolerance and pride in a European identity could yet provide a counter-shock to the reactionaries. The people who have the longest futures ahead of them should demand better. And their elders should try to put aside their fears and acknowledge how much they have personally benefitted from a united Europe.

And, for everyone’s sake, let’s put the English tabloid press out of business.

Added. Here are a couple of snippets I found on Twitter. I’m not sure of their provenance and I can’t vouch for them. Nonetheless, they are interesting.

The first shows the results of a poll looking at voter turnout by age group. Had the young turned out in the numbers the old did, the Remain side might have won.

The second is an analysis from, I think a comment in the Guardian.The writer argues that Cameron has basically snookered his successor. While Nigel Farage undoubtedly wanted a win for Brexit and most people who voted to leave genuinely wanted it, no Tory politician wants to be responsible for triggering and negotiating a drawn-out Brexit.  There’s just nowhere to hide when, not if, things start to go horribly wrong. Boris Johnson may have been hoping all along to lose the vote by a small margin.